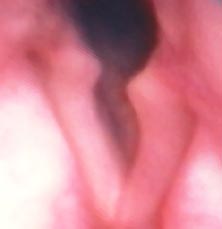 The most common causes of vocal fold paralysis include iatrogenic (surgical trauma such as carotid endarterectomy, thyroidectomy, or cervical spinal surgery), chest neoplasm, trauma, stroke, and other neurologic disorders. It is important to differentiate vocal fold paralysis from fixation. Fixation is when the vocal fold is immobile but the nerve supply to the larynx is completely intact. This may occur from intubation injury during surgery for various reasons or from ankylosis secondary to arthritis. It is important to distinguish between fixation and paralysis because the treatment is drastically different. Paralysis is usually treated with medialization laryngoplasty and fixation is first treated with direct laryngoscopy and vocal fold mobilization. If the vocal fold cannot be mobilized endoscopically, medialization may be indicated. The most reliable method of differentiating between paralysis and fixation is laryngeal electromyography ( 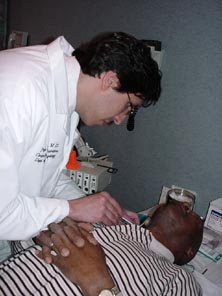 Figures 3 and 4. Endoscopic image of a person who was incorrectly diagnosed with bilateral vocal fold paralysis after a thyroidectomy. The patient underwent an emergent tracheotomy. LEMG was performed and was normal. At direct laryngoscopy a posterior scar band was identified and lysed with the CO2 laser. The posterior glottic scar was a result of having a breathing (endotracheal) tube placed at the time of surgery. The patient regained full vocal function postoperatively and the tracheotomy tube was removed.

The most common causes of vocal fold paresis are post-viral (post-viral vagal neuropathy) and after endotracheal intubation for any number of surgical procedures (gall bladder, hernia, hysterectomy, etc…). Physical examination including strobovideolaryngoscopy may reveal abnormal laryngeal biomechanics or sluggish mobility of one or both vocal folds. Laryngeal EMG may be used to assist in the diagnosis.

Treatment of vocal fold paresis may be observation (tincture of time) for a paresis with a good prognosis LEMG or surgical for old injuries with little chance of recovery (poor prognosis LEMG). Please refer to the section entitled Surgical Treatment for Glottal Insufficiency for an overview of the surgical options.

Your message was successfully sent.
Thank You!